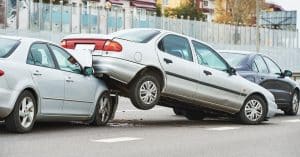 Even a minor car accident can cause the parties involved all kinds of trouble. Now, imagine how messy things can get if you are ever involved in a three-car accident.

Numerous factors can make sorting a multi-car accident way harder than the typical two-vehicle collision. Chief among those factors is figuring out who should shoulder the blame for the incident.

We frequently get questions regarding multi-vehicle crashes as people want to know what happens in that scenario. If you are curious about that topic yourself, then you have come to the right place. Go ahead and continue reading if you wish to learn more about the aftermath of multi-vehicle accidents.

What Is a Multi-Car Accident?

To get things started, let’s first define what a multi-car accident is. Multi-car crashes involve three or more vehicles hitting one another. If only two are involved in the collision, then that is a typical auto accident.

You may also sometimes hear multi-car collisions referred to as chain reaction crashes. Authorities label that kind of incident as a chain reaction crash because of how it usually unfolds. One driver may be the cause of the initial crash, but it can snowball from there. In only a matter of seconds, a collision involving only two vehicles can turn into a large pile-up.

Now that we know what multi-car accidents are, we can turn our attention to a related topic similarly important. To be more specific, we will discuss the common causes of three-car accidents.

Learning about the common causes of multi-car collisions is crucial if you want to steer clear of them. Check out the bullet points below so you can protect yourself better.

A three-car accident is dangerous. You can argue that it presents an even greater threat than the usual two-vehicle collision.

But, why are multi-car accidents inherently more dangerous? That is the question we will be answering using the bullet points in this section.

In a three-car accident, who pays? That question must be answered because the victims deserve fair compensation. Of course, assigning blame in an accident involving three or more vehicles is not going to be easy.

Even if the guilty party already knows they are at fault, they will not take responsibility that easily. They know how much money they could potentially lose, so the odds of them accepting blame are low. They may also think they can pin the blame on others, given how many drivers are involved.

You need to identify the parties who are at fault for the multi-car accident. One way to do that is by identifying the drivers who were being negligent at the time the incident occurred. There are different ways to tell if a driver was being negligent.

One or More of the Drivers Involved Violated Traffic Laws

Sorting out who is to blame in a multi-vehicle collision will be complicated, but there is a way to simplify matters. What you can do is try to identify any drivers who were committing traffic violations. Usually, their illegal actions contributed to the crash.

During the investigation, the police officers may discover that one or more of the drivers involved in the accident was drunk. It is also possible that one of the drivers was distracted by their phone before the crash. Speeding is yet another example of irresponsible driving behavior. In other words, they were being negligent, and they must be held responsible.

The investigation may reveal that one driver’s negligent actions directly led to the first crash. Name them in your lawsuit so you can recoup the compensation you deserve. The other drivers will likely do the same thing.

One or More of the Drivers Involved Was Not Driving Properly

So, what if none of the drivers involved in the multi-car accident violated any traffic laws? Who will get the blame then? In that scenario, the investigators will look at how the pile-up unfolded and follow the sequence of events.

In that scenario, the blame can be on the driver upfront. They should not have stopped when they did. They will have to answer for what happened.

The multi-car accident could also be the result of one driver rear-ending another. They may have been tailgating on a busy stretch of the road and failed to notice the light turning. By the time they were pumping the brakes, it was already too late.

Multiple drivers can also be responsible for the incident because they were driving carelessly. Two cars tailgating in the same line can contribute to a massive pile-up. The drivers of both those vehicles will have to answer for their actions and potentially provide financial compensation.

Next Steps Following a Multi-Car Accident

Knowing who to blame following a three-car accident is one thing. That will certainly help when the time comes for you to sue. Before you worry about that, there are steps you take to ensure that you can claim fair compensation. Learn more about those steps in this section of the article.

Contact the authorities and emergency service providers as soon as you can. The emergency workers can help anyone injured at the scene. Meanwhile, the police officers can isolate the area so no one else is hurt.

You should still call the police even if it does not seem like anyone was seriously injured. They can help collect evidence and information at the scene of the accident. Unless someone needs emergency assistance, you sit and wait for the police officers to arrive. Avoid touching or moving anything in the meantime, so the accident scene remains intact.

Avoid Talking with Other Drivers Involved in the Accident

Nothing good can come from conversing with the other drivers involved in the accident. If a driver already knows they are at fault, they may try to pin the blame on you. They may also encourage you to take money instead of getting the authorities involved.

It would be best to avoid the other drivers until the police officers show up. Talking to them is only necessary if you need their contact details. Even then, you can wait for the police before you request that information.

There is no need to speak to the other drivers involved in the accident but talking to witnesses is a good idea. Approach the witnesses who saw the crash and ask them to describe what happened. You can record their statements if they are okay with that. Do not forget to ask for their contact details so you can reach out to them later.

You can also take photos of the accident scene. Take pictures of the vehicles and the surrounding areas. Those pieces of evidence will prove useful when you eventually file your lawsuit.

Go to the Doctor

Schedule a visit to the doctor following the three-car. That way, you can be certain that you did not sustain any injuries. If you were injured, the doctor will spot your symptoms before they get any worse.

Lastly, you need to hire expert legal assistance to improve your chances of receiving fair compensation. Your lawyer can also handle the dealings with the police if you need more time to recover. They can also speak to the insurers of the guilty parties if they come calling.

We at Breakstone, White & Gluck are always ready to offer our legal expertise. Allow us to help you navigate the complicated aftermath of a multi-car accident, so you receive the compensation that is rightfully yours. Contact us today, and let’s get to work on your case.