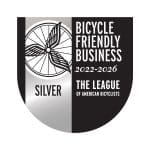 Breakstone, White & Gluck was recognized for its Project KidSafe campaign and 10 years of building strong community partnerships to reach low-income children and others with bicycle helmets. Breakstone, White & Gluck and its community partners – over 50 police departments, bike committees and local groups – have now given away over 33,000 bicycle helmets to children since 2013.

“We congratulate Breakstone, White & Gluck, which is most definitely a bicycle-friendly business worth celebrating,” said Galen Mook, executive director of MassBike. “Through the Project KidSafe campaign, the firm has given away thousands of helmets to help protect children and other cyclists, while also helping many groups organize community events that focus on cycling. This award is recognition for all the collaborations.”

By donating free helmets, Breakstone, White & Gluck wants to encourage children to wear a helmet– every time they ride.

“It’s critical that children have a helmet and wear one every time they ride a bike to protect against head injuries,” said David W. White, Marc L. Breakstone and Ronald E. Gluck. “A child’s brain is going to take them through life so we want them to have fun riding but to always protect themselves.” 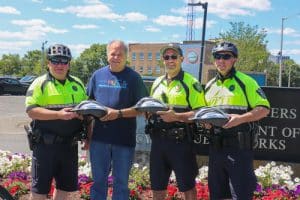 Breakstone, White & Gluck partners with the Quincy Police Department on bike safety since 2017.

With the Project KidSafe donations, the Lynn Police Department has given away free helmets to children at community events, such as the Latino Festival and at the local YMCA. In 2021, the department hosted a Bicycle Safety Day for children age 11 and younger.

“The donations have helped us give a lot of helmets to children who needed one, who may not have otherwise had one,” said Lynn Police Chief Christopher P. Reddy. “The helmets have also helped us engage the kids in a positive way and promote safety.”

Support for Schools and Community Groups

The firm’s partners include MassBike, Massachusetts Safe Routes to School and Bikes Not Bombs of Jamaica Plain, which teaches children and teens how to build their own bikes through its Bike School. Students get to take the bikes home and Breakstone, White & Gluck gives each student a free helmet to encourage safe riding.

Safe Routes to School uses the Project KidSafe donation to give students in low-income communities a helmet so they can participate in school bike rodeos, special programming and events, such as the Lawrence Ciclovia.

“The Massachusetts Safe Routes to School Program is appreciative of the ongoing partnership with Project KidSafe. Through their annual helmet donation, our Program is able to provide 400 helmets to students in low-income communities as they go through our bike safety trainings,” said Massachusetts Safe Routes to School Program Director, Diane Hanson. “Making sure our students have the right equipment and knowledge to stay safe while biking to and from school is one of the main goals for our Program.”

Last year, as part of the collaboration, Breakstone, White & Gluck teamed up with Safe Routes to School to donate helmets to support the Framingham Public Schools and local businesses and organizations, which surprised 100 middle school students with new bikes so they had another way of getting to school. COVID-19 restrictions had limited seating capacity on school buses. The partnership included the United Way of Tri-County, Jewish Family Services of MetroWest, 1854 Cycling and Crimson Bikes. 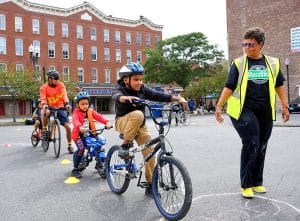 In Lowell, Breakstone, White & Gluck has partnered with The Bike Connector, a non-profit, volunteer and community-based program which refurbishes and donates bikes to children and families who need one. The Bike Connector was initially founded to help high school students find affordable and reliable transportation, but now helps more family members.

“We couldn’t be more grateful to Breakstone, White & Gluck and their Project KidSafe campaign,” said Wade Rubenstein, founder and president of The Bike Connector in Lowell. “With the firm’s support, The Bike Connector has been able to give away 600 bikes with helmets to help children and families in Lowell over the past two years.”

Rubenstein continued, “It’s been a great relief to be able to cross this need off our list. We can focus on finding and repairing bikes to help as many people as we can, and to building our local community partnerships to help us connect with families in need. Families often need a few bikes, as well as helmets to ride safely. We are really thankful.”

Support for Bike Clubs and Bike Events in Boston 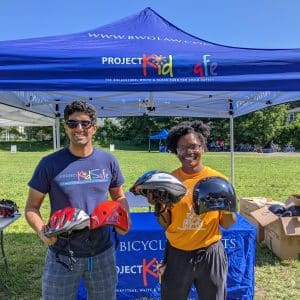 Attorney Reza Breakstone with Shavel’le Olivier of Mattapan Food and Fitness Coalition at Mattapan on Wheels in 2021.

Over the past few years, Breakstone, White & Gluck also began new donations and has participated in Mattapan on Wheels and the National Bike to Work Festival on Boston City Hall Plaza. These special events offer many cyclists – students and commuters as well as families – their first experience on a bike in Boston. Breakstone, White & Gluck has donated helmets to help cyclists get started riding safely.

“Mattapan Food and Fitness Coalition (MFFC) is grateful for our partnership with Breakstone, White & Gluck and their donations of helmets every year,” said Shavel’le Olivier, executive director of the coalition, which organizes the Mattapan on Wheels Bike-a-Thon. “We strive to bring more awareness to alternative ways to get around Mattapan and being able to distribute helmets helps residents feel much safer and may encourage them to ride their bikes a little more.”

About The League of American Bicyclists

The League of American Bicyclists is leading a movement to create a Bicycle Friendly America for everyone and celebrates businesses that encourage and support cycling through the Bicycle Friendly Business Program. With its recent announcement, the League has now honored 1,471 businesses since 2008.