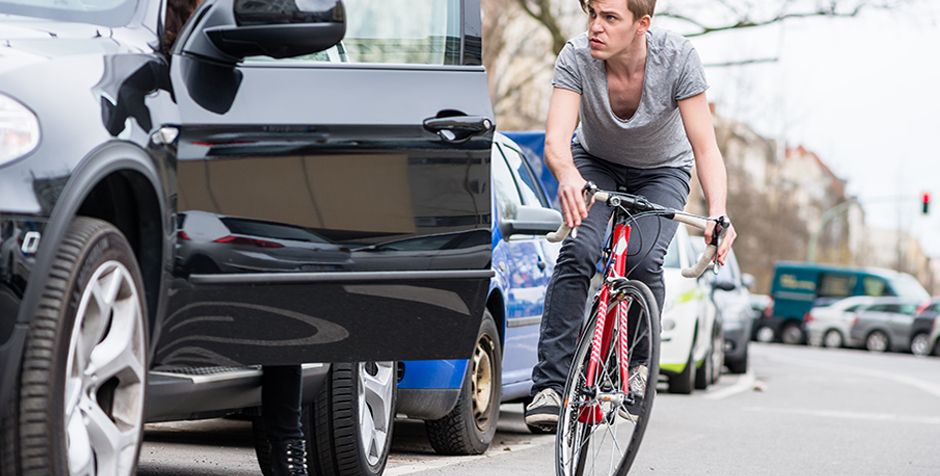 Dooring accidents almost always cause severe and debilitating injuries to cyclists. Massachusetts and other states have laws that say drivers have a responsibility to look before they open car doors. When they neglect to do so, cyclists can crash into a vehicle’s open door or be forced into a traffic lane.

Dooring crashes are not just serious; they can be fatal. Cyclists may survive, but suffer shattered teeth and facial bones, lacerations, broken bones and head injuries. Rehabilitation can be a long and trying process.

At Breakstone, White & Gluck, our bicycle accident attorneys are committed to providing cyclists with personalized attention and negotiating the compensation you need after a dooring accident. We are here to explain the legal process and aggressively represent your best interests.

Dooring is against the law in Massachusetts and at least 39 other states, according to the League of American Bicyclists. In Massachusetts, M.G.L. c. 90, § 14 states:

“No person shall open a door on a motor vehicle unless it is reasonably safe to do so without interfering with the movement of other traffic, including bicyclists and pedestrians. Whoever violates the preceding sentence shall be punished by a fine of not more than $100.”

Massachusetts is one of three states which recognize the danger to pedestrians in the law. The other states are Rhode Island, Oregon and Washington D.C.

After many dooring accidents and injuries, the state of Massachusetts added a new section to the driver’s manual in 2017. Drivers are now encouraged to use the “Dutch reach method” when parking and exiting cars.

The Massachusetts driver’s manual reminds drivers to check rearview and sideview mirrors, then open the vehicle’s door with their far hand (and observe traffic around them as they reach). Drivers should open the door with their right hand, as this positions them to have the best view of oncoming cyclists.

Dooring accidents are preventable if drivers slow down and follow these steps.

Facts and Statistics: Dooring Injuries in Massachusetts and the U.S.

What Should I Do if I Have Been Injured by a Dooring Accident?

First, visit a hospital to receive the medical attention you need. Once you have seen a doctor, you can consult with Breakstone, White & Gluck; our bicycle accident lawyers can explain your legal rights, advise you if you have a potential claim and promptly investigate.

It is important that you contact police and file a police report promptly. Our firm will interview witnesses while their memories are still fresh. On city streets in Boston and Cambridge, traffic is thick. Finding witnesses who actually saw a bike crash, especially one involving a parked car, can be challenging, so it is critical to start investigating right away. There may also be video surveillance from nearby buildings or even vehicles that were in the vicinity, such as MBTA buses.

What Benefits Are Available for Injured Bicyclists?

Massachusetts law provides up to $8,000 in personal injury protection benefits (PIP benefits) for injured cyclists. These are known as “no-fault” benefits. These benefits cover medical bills and lost wages of the injured person.

In addition to the PIP benefits, our lawyers will negotiate compensation available from the auto insurance policies, including potentially your own household auto insurance.

How Long Do You Have to File a Claim After a Dooring Accident?

There is a Statute of Limitations on bicycle accident injuries in Massachusetts. Ordinarily, you have three years to file a lawsuit against the driver at fault or you lose your right to seek compensation in the courts for your injuries. There are some exceptions for making claims within two years, so contacting an attorney as soon as possible is very important.

At Breakstone, White & Gluck, we understand a dooring accident can take everything away from you in an instant. Our goal is to help you make a full recovery physically and emotionally and get back to living your life as soon as possible.